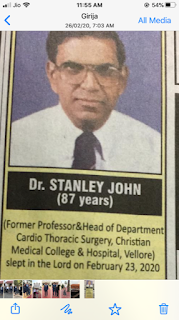 This is a gentleman whom I have never seen. He had been out of my mind
for the last few decades and I had forgotten about his existence till my
sister sent me this picture today morning.

But I did hear a lot about him long back. Half a century ago. Dr Stanley John
was probably one of the very few in the country, who were conducting open
heart surgeries. At CMC Vellore. In fact I heard the name CMC Vellore only
when one of my cousins was taken there for surgery, to treat a heart condition.

An open heart surgery was something people had difficulty in believing to be
possible. Like landing on the moon ! I remember that my cousin was
accompanied by his father and four of his uncles. My father was one of them.
I understand that a high level delegation was necessary to see the place,
meet the doctors and decide whether to go for the surgery or not. It seems
the group of doctors talked to them with a lot of patience, explained the
procedure in detail and a thumbs up was given for the surgery. Dr John
must have been the leader of the group.

But I did not hear about Dr Stanley John, then. On hearing about the success
of the surgery, our neighbour decided to take his daughter to Vellore, to
consider a surgical option to treat Fallot’s Tetrology. He was a Freelance
journalist and an accomplished photographer.

He was extremely impressed with the personality of Dr Stanley John, and I
heard a lot about Dr Stanley from my neighbour. After the surgery of his
daughter, he visited CMC many times to photograph the OT and the
equipment and also to interview the doctors. This resulted in a detailed
pictorial which was published in the prestigious Illustrated Weekly Of India.


The obituary of Dr Stanley John brought out all these memories. I hope he
lived a full life, died peacefully and rests in peace.
Posted by M S Raghunandan at 11:25 PM No comments:

The two of us, myself and my friend Triambak, camped on the outskirts
of Ponda in an open area last night. We pitched our tent, ate our dinner,
sat for sometime looking at the sky and the procession of airplanes on
their landing path and then tried to sleep. It was strange. I was feeling
sleepy but couldn’t sleep. The tent was comfortable, weather pleasant
but sleep evaded me. I kept counting the airplanes passing over the
tent and might have slept fitfully for an hour or two.


Morning was great, we walked around the area, took some pictures,
drank the left over hot water ( used for making soup the previous night)
and returned. We plan to use the tent more often and hope we get to do it ! 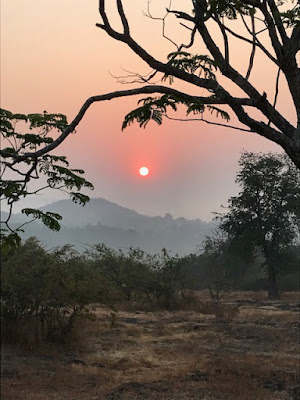 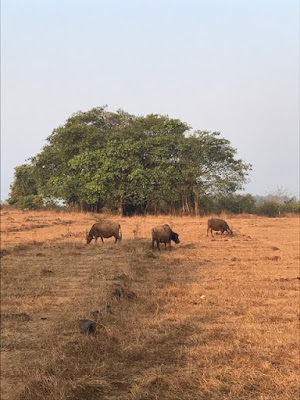 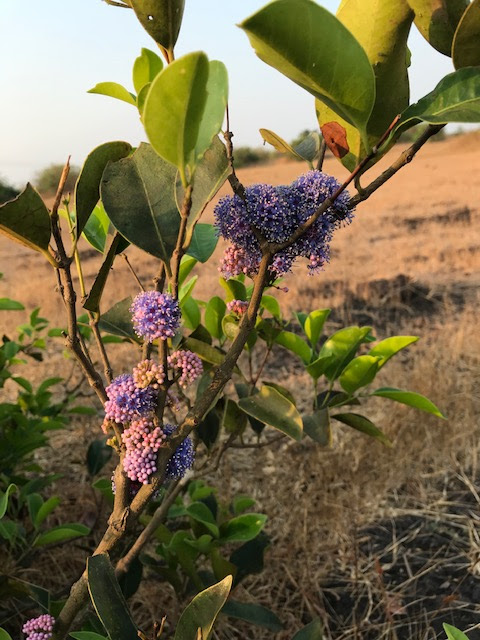 Population is beyond control, traffic is crazy, roads are dusty and weather
not at all what it used to be. As a person born in Bengaluru 60 years back I have my
list of complaints about this city. But one very pleasant aspect that always appeals
to me is the creation of parks in almost every residential extension. You keep
walking deep inside the concrete jungle and unexpectedly you find an oasis of
green ! The layout though varying in size, is standard. Paved walkways, benches,
covered meeting places and exercising equipment.  I am glad that the BBMP has
retained the habit of creating parks, a trend which began with Sri  Lakshmana Rao,
erstwhile commissioner of the Bangalore City Corp converting both sids of the
Rashtreeya Vidyalaya road into long stretches of gardens. Pictures below are from
two such gardens in Banashankari 2nd Stage. 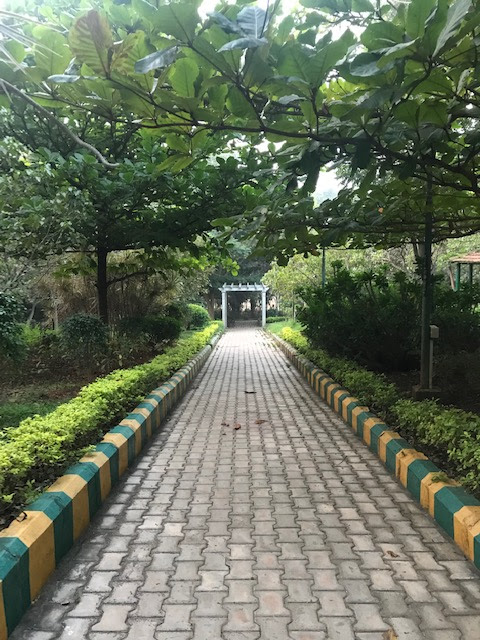 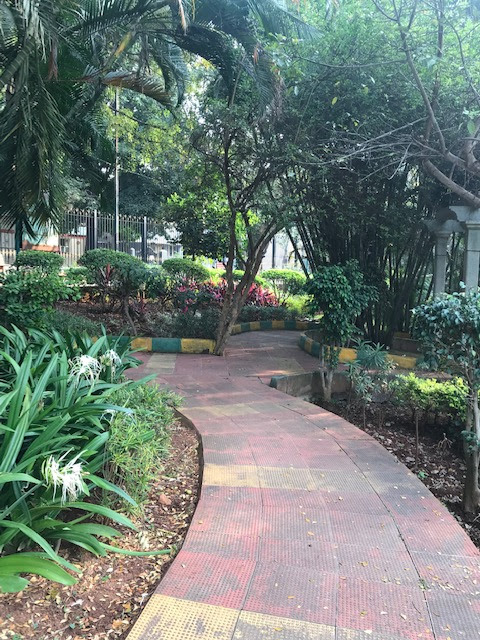 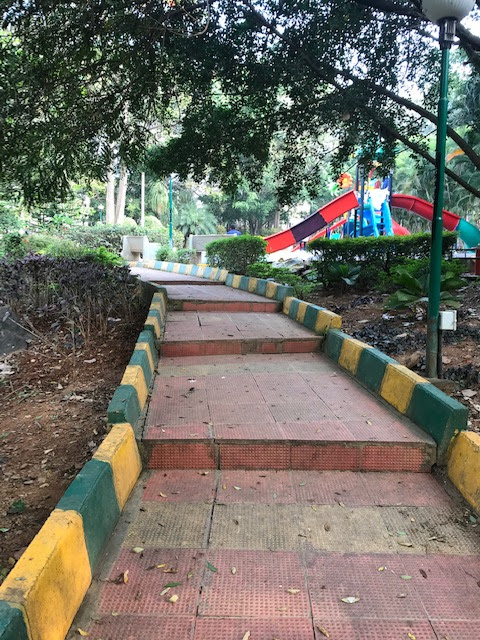 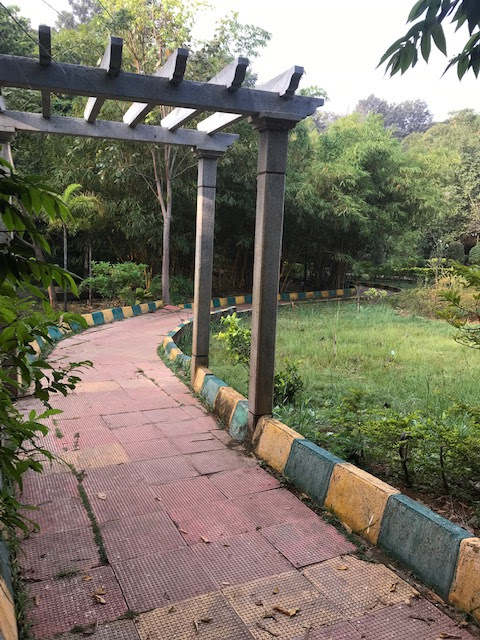 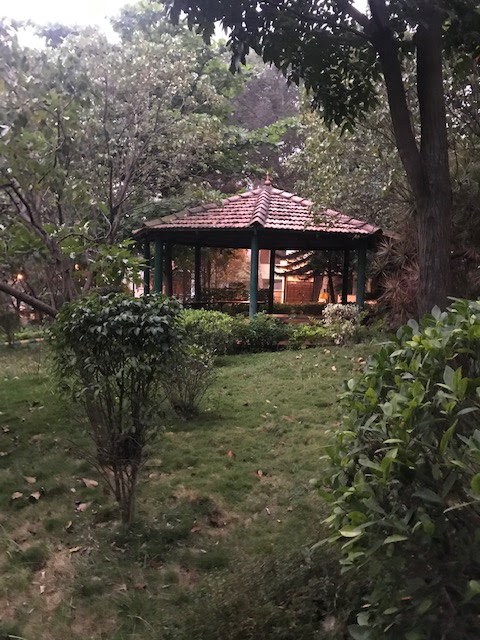 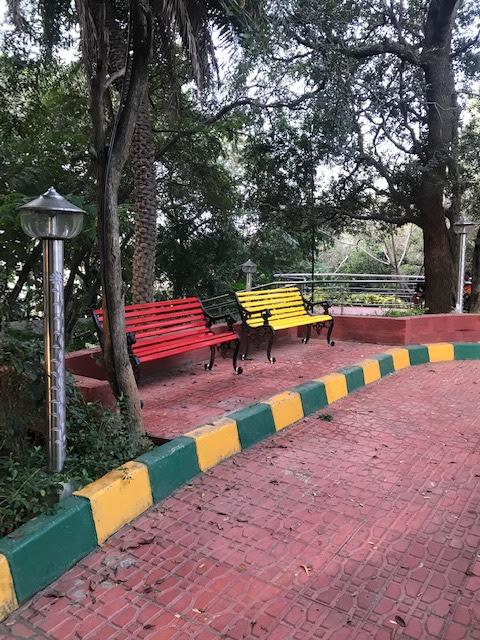 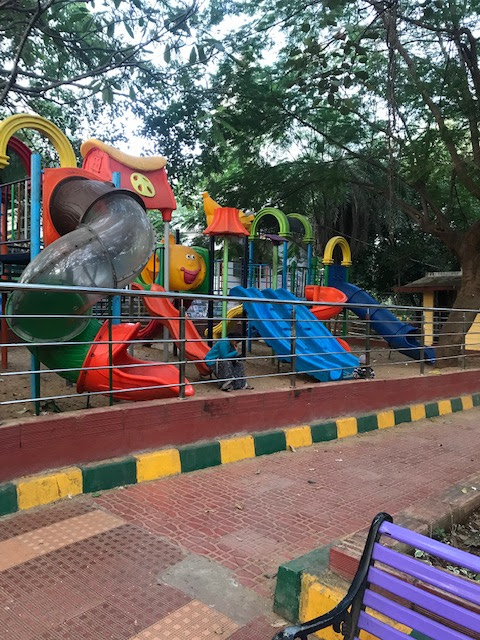 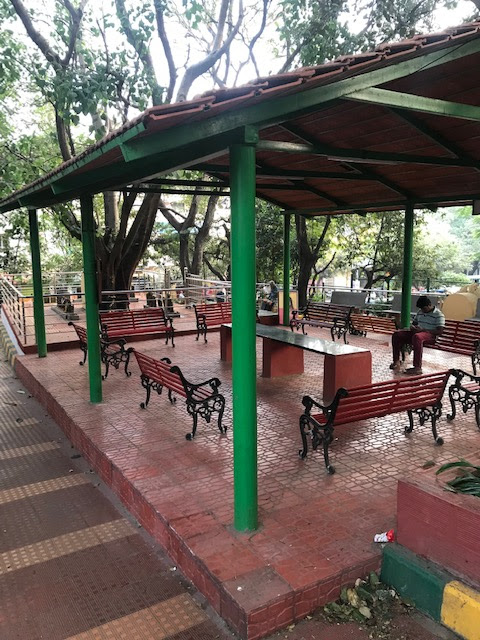 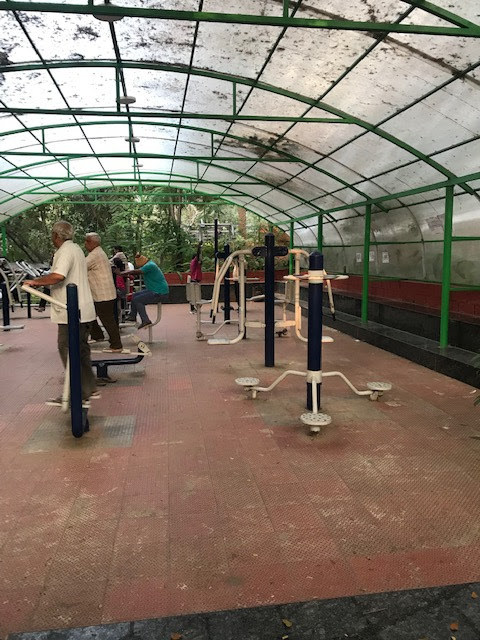 Posted by M S Raghunandan at 5:19 AM No comments:

I am in Chennai and it is almost the end of Margazi Music Festival which
is held every year during December - January. Just a few stray concerts
are being held here and there, The news papers did not show up any
concerts worth visiting this morning. It was disappointing.
I happened to be at Mylapore in the morning and had a few hours to
myself. I started  walking along the road in an aimless sort of way and
came across an old building which houses a library. Thought that I would
take a look, and entered the building. I found the library closed but could
hear some music on the first floor. Went up the stairs and was thrilled
and surprised to find a concert going on! Chennai was living upto my
imagination and its reputation !

Unfortunately it was a small affair, had begun much earlier and was
almost ending but it brightened up my day! I Sat there for the last
half an hour of the concert and then proceeded to the famous
Kapaaleeshwara temple which was not far away. I love the sight
of the large temple pond and intended to spend some time there.
Bad luck again, the pond is barricaded and locked. I could only see
the pond through the iron fencing. Temple precincts were crowded
with people who intended beginning their new year with a visit to
the lord. (looking at the way things are going in the world, I feel
that he is our only hope!)

As it happened, the day turned out to be better than expected.
I could attend two concerts and the canteen of a "Sabha"
(music lovers organisation) which is more famous for its lunch
than music !

Took pictures of anything that I fancied and posted them with captions.

Mhadei River Water Issue - my reaction to some developments. 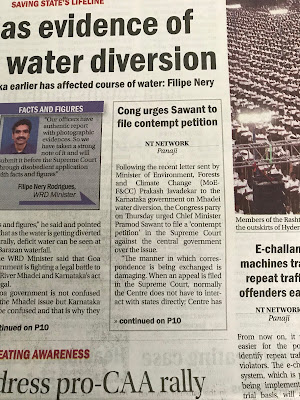 Since yesterday my mind is occupied by this Mhadei water issue.
First, I saw a recording of the press conference by the Progressive
Front Of Goa, where speaker after speaker blasted the union
minister for Env & Forests, Sri Javadekar for his back stabbing
and U turn.


Then came the news paper where the headlines said PFG
demands resignation of CM of Goa and  also mentioned almost
everything that I had seen in the video clip.


Today’s newspaper says that Congress Demands contempt of
court case to be filed against Sri Javadekar.


After seeing all these, I was curious to see where the U turn and
backstabbing took place!!  I wanted to see blood stains if possible.
Thanks to our bollywood, and Whatsapp, we are now addicted
to seeing blood.


I had nothing much to go by other than two letters which have
been in circulation amongst all whatsapp groups in goa for the
past few days.


I searched for and found them.


One letter is dated 18 Dec 2019, signed by the Deputy director,
some division of Ministry of env & Forests,  says, “Subsequent
to learning that the river water dispute between Goa and
karnataka is in SC, the letter issued on 17 Oct 2019 (Probably
the letter giving environmentl clearance to Khalsa Banduri
Canal work ) is kept in abeyance.”


The second letter dated 24 Dec 2019, Signed by Minister for
Env &Forests Sri Javadekar, says, “Government of India has
not kept in abeyance, the EIA notification of 2006 or the rule
that drinking water projects do not need environmental clearance”


It goes on to say that Karnataka can start the work once the
water tribunal verdict is notified in the gazette.


I was very disappointed that I could not find any backstabbing,
U turn, or blood stains anywhere !! 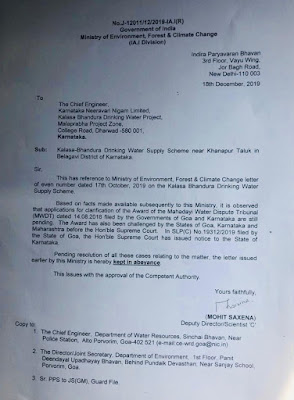 Any sensible person reading and understanding the two letters
can make out that the letters are written by two different people,
pertain to two different enquiries and refer to yet two more
different matters.


And if the Minister says that Karnataka can start the work,
subject to notification of tribunal verdict in the gazette, he is
again right because the tribunal has awarded certain share of
Mhadei water to Karnataka. And gazette notification will come
only after SC takes a stand/ decides on the case.


Now the petitions in SC, their outcome,  misinterpretation and
misuse of letters are all entirely different matters.


I tried to contact people directly connected with the issue for
clarification but no answer is forthcoming.

I don’t see anything wrong anywhere and I don't know If it is
because I have missed something, Confused, Stupid or because
I can only read what is written and


have no ability for thinking crooked.


Now that I have written this, my mind is free. This writing doesn’t
serve any purpose but I can concentrate on other matters like
dentistry, my pension arrears, tax liability, new number plates
etc etc which are waiting.


My wife says “why do you break your head about all these things,
why can’t you keep quiet and attend to your work”.  Well, I don’t
know. I think I should heed to her advice. 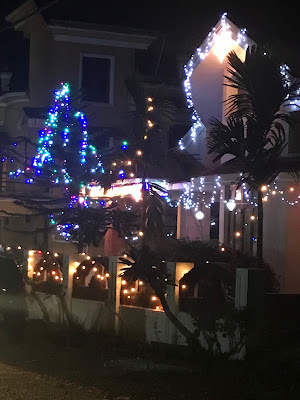 During the last month, the onion prices skyrocketed, there was the very
un fortunate  affair of rape and encounter killing at Hyderabad and
following that was the nationwide disturbance because of CAA, which
is still raging.


All troubles and disturbances born out of human greed, ill will, wickedness
and in general, human nature.


One has to think a hundred times before accepting any other human being
wholeheartedly, unquestioningly, completely. And we are still not sure !


I think that’s why we have our gods and our beliefs. To provide us with
an entity which we can wholeheartedly accept, without any hesitation and
a mental frame to  do so.


And our festivals are there, to probably reaffirm and remind us about it.
Also, to provide us with a time space during which we can put aside the
irritations created by us, temporarily. 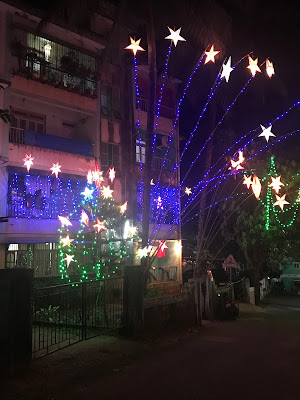 Christmas, is a festival with a very nice feeling. Rejoicing the arrival of a
divine power  amidst us. Believers revel in the festival spirit. Others may
enjoy the festive atmosphere ! Sri D V G, a philosopher/poet says,
“to be able to enjoy other’s happiness is the greatest of virtues”! 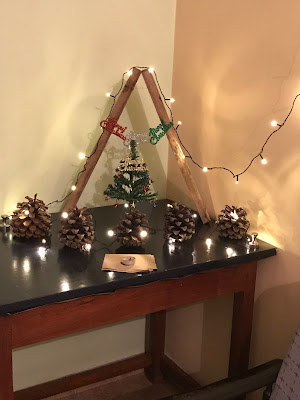 My neighbours have prepared for Christmas with lot of enthusiasm.
My daughter in law has added to the spirit with a  Christmas decoration
in our waiting room ! And the Christmas cake gifted by a kind patient is not
a cake but the proverbial icing !! 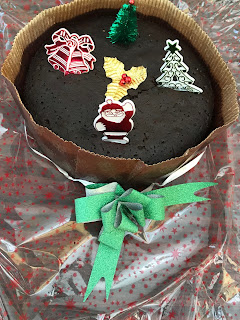 Merry Christmas to everyone ! 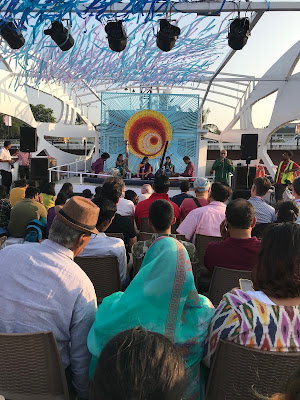 I first heard about the Serendipity art festival four years back. I remember
that there was a music programme and an exhibition of paintings in the Panaji
Municipal Garden. I remember having seen the exhibition. My knowledge of arts
(and everything else) is poor and I don’t remember much about it.

I have been hearing the name of the festival every year since then. Last year
there were some very large and artistic (ugly to my eyes) sculptures which were
displayed all over the city during the festival and one of them, a hen in a bag,
(I think it was a product of the festival and not ordered by PMC for ‘beautification’ of
the city - I may be wrong) was given a permanent space on the footpath next to
D B Road. It occupies a major part of the footpath and I hated it and people
responsible for it, for that. Very thoughtless, irrespective of the beauty of the
sculpture. (My opinion, obviously, not of PMC)

This year I got to know of the Serendipity Festival in little more detail and registered
for few performances. I attended the River Raaga and the Yakshagana on the 18th
and was stumped by the punctuality, performance, arrangements, facilities, attention
to detail and - the most important - toilets ! I was told the arrangements were equally
good in many of the programmes my family members attended.
The festival includes dozens of programs and workshops in various art forms and also
other activities like cooking, gardening, city walks etcetc.
I plan to utilise it fully next year, if it is held in Goa !
👍👍 to Serendipity arts festival. 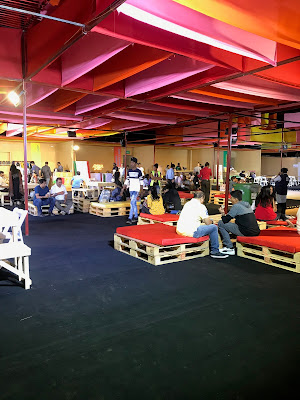 Posted by M S Raghunandan at 2:39 AM No comments: